An early morning start brings us to the Catholic cemetery in Krakow. This is a polish cemetery, but inside it there is a British military cemetery. 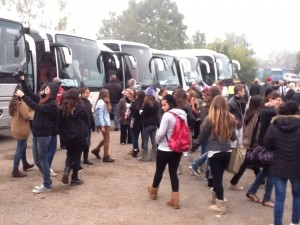 We came into the Rakowitz Cemetery with Israeli flags, we will have a short ceremony here, the entire group together, Jewish prayers in memory of the Jewish soldiers buried here.

13 Jewish soldiers from Palestine are here, they have volunteered to fight together with the british against the Germans, they were captured in Greece and transferred to Poland and died here in Poland. Inside a catholic cemetery, we have Jewish graves, we will leave here Israeli flags on each grave and remember these who died outside their own country. They were held as war prisoners by the natzis, and later were killed by the Natzis and buried here after the war. 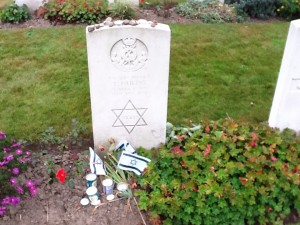 Look at the Magen David on this grave. His name is L. Herzig, died on may 1944, here together with many more British soldiers.

Abigail putting flowers on the tomb of a 19 years old soldier: 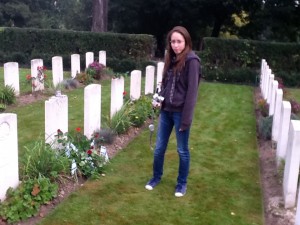 Around lunch time we spent 2 hours at the city square, eating and shopping.

On the bus, 2 hours driving towards Lublin, we will watch the movie “Schiendler’s List” which will summarize the story of Krakow for us.

This cemetery is 3 hours drive from Krakow. This town started with Jews at 1868 and by second world war there were around 25,000 Jews in the Ghetto. The Ghetto is destroyed on august 1944 and more than 20,000 people were sent to Treblinka. After the war 200 Jews return here to look for survivors. They are not welcomed by the local polish people who meanwhile took their homes and property, they don’t like them to return and on July 3, 1946 a polish couple tells the police that their child disappeared and when he returned, he said he escaped the house on plant 7 st., where the Jews lived after the war. He said that he was taken to that house, kept there in the basement and he found there lots of dead polish kids and Jews were taking their blood to make mattza for Passover. The police takes this very serious, rumors start in the city, polish people come to the house, there is no basement at this house, but still the people of the city and 3 polish officers come in and shoot a Jew from that house, after the holocaust, again Jews are killed here in this city by the local people. During that day 3 Jews are killed also, Regina and Moskowitz and their son Avram are taken to the woods and murdered there, others are lynched by polish police and residence of the city. In this pogrom 41 Jews were killed, more than 50 wounded and eventually the polish army came and stopped it. Some of the leaders of this pogrom were arrested later.

The whole pogrom was planned by polish, who hated jews and didn’t want the returning jews to come and retake their houses and property, so they told the child to say what he said.

In the tomb here we have 47 Jews who were murdered on this pogrom, 7 of them were not even identified and we don’t even have their names, some survivors from Auschwitz who survived hell just to be killed here after the war: 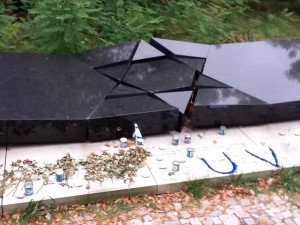 In 1942 Jews from this town were sent to the camps. It was in August, 3 trains left with 6,000 Jews each to camps like Sobibor and others, the rest were left here to work and few months later, 42 kids from town were murdered here. 3 kids only were saved, after the war parents in August 1945 built this tomb stone. One of these kids was Gisela Herbert, 15 months old, her mother Sara Karbel gave a testimony about what happened here: Germans ordered to give the kids, they were taken to a small house near by, they were crying as their parents stood there hearing them. She had her baby hidden under her coat, finally an Ukraine policeman saw her and took the baby to die, they died without their parents near them.

Listening to a song titled “let us grow in peace” we name the children by name and age, this is to remember them now as we stand by their graves

Click on this to listen to the reading of names 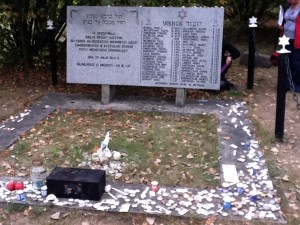 After the ceremony, we had to drive for at least 3 hours to get to Lublin, we had dinner at the university of Lublin, and at very late hour, after a very long day, we arrived to the hotel.